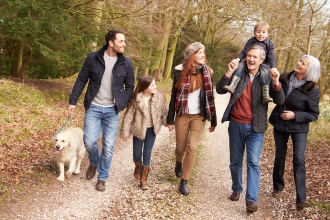 It is well documented that walking helps keep us healthy and prolong our lives, and walking for only two hours per week reduces the risk of all-cause mortality. Walking has also been linked with enhanced cognitive abilities and improved psychological well-being.

A recent study led by researcher Prof. Emmanuel Stamatakis explored the links between walking speed and mortality due to cardiovascular disease, cancer, and all causes.

Prof. Stamatakis explained: “Walking pace is associated with all-cause mortality risk, but its specific role — independent from the total physical activity a person undertakes — has received little attention until now.”

The findings have been published in a special issue of the British Journal of Sports Medicine.

Walk for your life

11 population-based surveys were analysed by the researchers. The surveys were conducted in the UK in 1994-2008, and gathered data on 50,225 walkers.

From analysing the surveys, the researchers collected details on the participants’ self-reported walking pace, which was categorised as “slow,” “average,” or “brisk”.

A fast pace is generally 5 to 7 kilometres per hour, depending on the individual’s fitness level. A brisk pace could also be characterised as a pace that makes you feel sweaty or slightly out of breath when sustained.

The data the researchers collected were linked to mortality records. The analysis was also adjusted to take into account possible influencing factors, including age, sex, BMI, and general physical activity habits.

The analysis revealed that an “average” walking pace was linked with a 20% lower risk of mortality from all causes, and a “fast” pace was tied to a 24% lower risk.

Relating to specific life-shortening causes such as cardiovascular disease, the researchers discovered that people that walk at a brisk pace have a 21% lower risk of associated mortality. When walking at an average pace, the risk was reduced by 24%.

Prof. Stamatakis explained that although sex and BMI did not appear to influence outcomes, “walking at an average or fast pace was associated with a significantly reduced risk of all-cause mortality and cardiovascular disease. There was no evidence to suggest pace had a significant influence on cancer mortality however.”

The team also noted that older individuals seemed to reap more benefits from walking at a brisk pace.

The researchers believe that the findings of this study should be grounds for public health messages to mention the importance not just of walking, but also of walking pace.

“Especially in situations when walking more isn’t possible due to time pressures or a less walking-friendly environment,” Prof. Stamatakis goes on, “walking faster may be a good option to get the heart rate up — one that most people can easily incorporate into their lives.”

The researchers do admit that establishing cause and effect relationships in this context can be complicated.

“Separating the effect of one specific aspect of physical activity and understanding its potentially causal association with risk of premature death is complex,” explains Prof. Stamatakis.

Nevertheless, he says, “Assuming [the] results reflect cause and effect, these analyses suggest that increasing walking pace may be a straightforward way for people to improve heart health and risk for premature mortality — providing a simple message for public health campaigns to promote.”