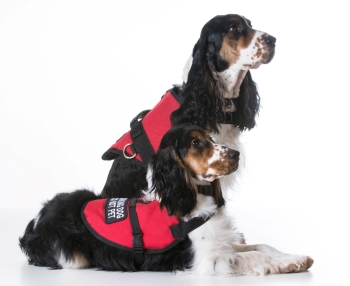 There are around 83.3 million owned dogs in the United States alone, and in recent years, organisations the world over have begun training dogs to detect medical conditions in humans.

UK charity Medical Detection Dogs conducted research in 2013 detailing how dogs have the ability to alert their diabetic owners when their blood sugar levels are too low (hypoglycaemic).

Other research has also shown that dogs are able to detect clostridium difficile bacteria in faecal samples and hospital air. This bacteria can cause many hospital acquired infections.

But how exactly are dogs able to detect human disease?

All in the scent

Dogs4Diabetics is a US organization that researches, trains and places medical assistance diabetic alert dogs with insulin-dependent diabetics.

“We believe all diseases have scent associated with the diseases, due to the changes occurring within the body, with different organs expressing different chemical compounds. These scents are evident in breath and sweat,” explained Ralph Hendrix, executive director of Dogs4Diabetics.

“Dogs have highly sensitive senses and can learn to recognize symptoms from many types of disorders. In our work, they are not taught to react to symptoms, but to scent.”

Of course, dogs do not automatically detect the scents – it requires a lot of training to ensure the dogs are able to carry out their job.

Hendrix explains that the dogs must meet certain criteria in order to become medical detection dogs.

“The criterion ranges from their behaviour characteristics, their relationships with humans (ability to bond and willingness to please), their environment soundness, to their work ethic, motivations, response to reward, etc.”

Dogs4Diabetics generally uses Labrador retrievers and golden retrievers, or a mix of the two breeds.

“Other breeds may work, but these breeds are well accepted for service work because of the temperament and disposition to work with their human companions,” he explained.

Hendrix also went on to explain how dogs are trained on a scent collected from a diabetic’s breath or sweat when they are experiencing hypoglycaemia.

He also added that it can take a long time to train the dog to transition from “scent discrimination training” to detecting actual hypoglycaemia.

“All diabetics will have residual scent around from previous hypoglycaemic episodes. This ‘dead’ scent lingers in their home, their clothes, their bed. The dogs have to learn to differentiate the ‘dead,’ lingering scent from the ‘live’ scent, and transition their alert to only the live scent for which they are rewarded.”

When elaborating that the dogs also need to be trained to identify and alert in different environments, such as work, school, or in the car, Hendrix said:

“To the dog, it is simply a game with positive rewards that is played everywhere.”

Dogs4Diabetics’ clients also receive training, including how to respond to the dog once it alerts them to the problem. The owner must ensure that the dog is accurate by testing their own blood sugar levels.

Research is ongoing into the use of dogs to detect various types of cancer. These dogs are known as “bio-detection dogs”.

Research has explained that the dogs are able to detect volatile organic compounds (VOCs), or odorants, that are altered in the early stages of ovarian cancer. These VOCs may also be biomarkers of bladder cancer.

A 2011 study found that by using four trained sniffer dogs to analyse urine samples from bladder cancer patients, the dog’s specificity in detecting the cancer ranged from 56% to 92%.

“We condition the dog to the volatile pattern of a cancer sample with the use of an audible sound, such as a clicker. The clicker is associated to something the dog enjoys. For example, a treat or toy.

The clicker signals to the dog that the last behaviour carried out before the click was correct and he will receive his reward. Over time, the dog learns that the click only appears as he sniffs at a cancer sample.”

From this research, investigators have begun creating devices that may detect cancer by mimicking a dog’s nose.

The Na-Nose™ – created by researchers at the Technion-Israel Institute of Technology and Alpha Szenszor, a carbon nanotube manufacturer in Boston, MA – is a device that can analyse more that 1,000 different gases in the breath in order to detect lung cancer. In clinical trials, the device has been found to have up to 95% accuracy.

Despite the evidence, some still have reservations with regards to the dog’s accuracy in identifying diseases.

Hendrix explained that a dog’s detecting ability is dependent on the training it has received, and whether they have been trained to the required standards.

“I see no problem in using trained dogs with a proven ability to assist in the detection of the possible presence of a disease. If the dog can identify the risk of its presence in the fashion that it has been trained with the known level of reliability, then I believe that the possibility exists that there is a problem, even if current technology does not immediately confirm the risk. The person should be followed more intently for the prospect of its appearance.”

However, Hendrix did note that some dog training companies exist that are not providing the necessary training to ensure their dogs are fully qualified medical detection dogs.

“We are particularly concerned over cases where people are selling puppies and rescued dogs with purported hypoglycaemic alerting skills to be used with diabetics and for public access,” he said.

“It is impossible to imprint a puppy with a scent and then expect it to be a reliable and consistent alerter over its lifetime. But people are paying $20,000 or more in a desperate attempt to obtain a ‘trained’ dog.”

There are also cases where pet dog trainers attempt to train service dogs or medical assistance dogs, but do not have the relevant training or background themselves.

“We are appalled when we hear of trainers or diabetics who are willing to put the life of their child or a loved one in the safety of a dog that has not been properly trained, certified, or without sustained training and ongoing support from experts,” Hendrix added.

The future for medical detection dogs

The first diabetic hypoglycaemia alert dog in Britain is a Labrador called Zeta. One of Zeta’s owners, Angela, says she looked to Medical Detection Dogs for a hypo-alert dog that could help with the management of her husband’s diabetes.

“The first time Zeta alerted, I became very emotional and cried because I did not really believe that alerting was possible. At first we thought she was making errors, then I realized that she was catching highs and also rapid drops in his blood sugar levels,” says Angela, speaking to Medical Detection Dogs.

“We really don’t know what we would do without her: she is worth her weight in gold!”

Emphasizing the benefits of these animals, Rob Harris, from Medical Detection Dogs, added:

“The real value of the dog comes with his ability to detect changes so early giving the client the opportunity to treat themselves, preventing paramedic callout and hospital admission. The assistance dog can accompany his partner everywhere, increasing confidence, independence and improving wellbeing.”

According to Hendrix, the challenge is to provide “consistent, provable and reliable” training in order to make use of the dog’s astounding senses so they can provide support to their human companions.

“Dogs are dogs, they cannot tell us what they scent, and trainers and handlers have to devise ways to both train the dogs and then validate the accuracy of their response to that training. They have to reinforce that training over the working life of the dog to sustain the skill. It can be done and there are protocols and processes that validate these skills.”

So what does the future hold for bio-detection and medical detection dogs?

Dogs4Diabetics founder Mark Ruefenacht says he believes we have only “scratched the surface” in what a dogs are capable of when it comes to helping to detect and manage human illness.

“The oft-heard, ‘human-animal bond’ has so much potential in the way we move forward in our working relationships with dogs,” he adds.