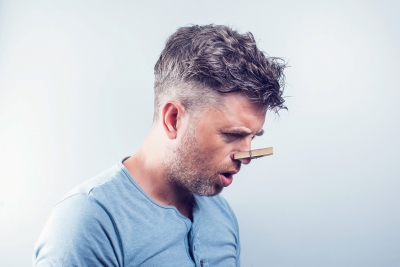 The relationship between odour and disease is an interesting two-way street.

Olfaction, or smell, is our oldest sense, yet often receives less attention than vision and hearing. A survey from 2011 discovered that around half of people between the ages of 16 and 30 would rather give up their sense of smell than their smartphone or laptop.

This may not actually be surprising – humans primarily rely on sight and sound, and so the loss of smell is less of a hinderance than losing sight or hearing.

However, olfaction is not to be sniffed at.

The whiff of disease

Producing a pungent smell is an essential ability for many members of the animal kingdom – for example, pheromones are used by many animals to advertise that an individual is healthy to potential mates.

However, in this section, we will look at the olfactory cues associated with disease – what do diseases smell like?

Since the beginning of medical science, disease has been linked to smell. One passage in the Sushruta Samhita – a Sanskrit text written long before the birth of Christ – reads:

“[B]y the sense of smell we can recognize the peculiar perspiration of many diseases, which has an important bearing on their identification.”

More recently, instead of sniffing their patients and tasting their urine, doctors use more socially acceptable and reliable methods. Some diseases, however, are still thought to have a characteristic smell.

The following descriptions of diseases’ aromas come from a paper published in 1998.

Sniffing out an immune response

From an evolutionary standpoint, it would be beneficial to be able to sniff out a sick individual. For example, if a mouse was able to smell the immune response of another mouse, it would be able to avoid the mouse and therefore any illness it was carrying, increasing its own ability to surprised.

This is not just idle theory; it is now well established that rodents can avoid sick individuals through odour detection alone.

Humans also seem able to smell which people are currently embarking on an immune response, as examined by a study published in the journal Psychological Science.

In the study, body odour samples were taken from a group of healthy volunteers. An immune response was then triggered in the participants by an injection of endotoxin. The body odour was sampled again, and then assessed and rated.

“Within just a few hours, endotoxin-exposed individuals had a more aversive body odour relative to when they were exposed to a placebo. Moreover, this effect was statistically mediated by the individuals’ level of immune activation.”

Put simply, the sick people smelled worse, and the sicker they were, the worse the smell was rated.

The differences in odour could be detected within just 4 hours of the immune response being triggered. The sick people also did not sweat more, but the smell was stronger and different to the healthy people’s.

Body odour is generally due to bacteria and skin gland secretions, particularly the apocrine sweat glands found in the armpits and other locations.

Body odour can be modified by infection in a number of ways. Firstly, some of the microbes in our body play a role in how we smell; and so, a pathogen that alters the levels or types of the microbes could also affect our body odour.

Genes associated with the major histocompatibility complex that control the body’s immune system have also been found to influence odour and mating preferences in mice.

Finally, an activated immune system changes the excretion of other metabolic byproducts from the endocrine system. For example, levels of corticosterone in the blood are elevated during an immune response, and androgens are reduced.

Click here for an article on medical detection dogs.

Electronic noses have developed hugely in recent years and are now able to detect a wide range of specific flavours and odours, and are already used in some industrial processes.

Most of the noses use sensors that react to volatile compounds as they make contact – the sensors physically change as they interact. The changes are then digitally recorded and pumped through statistical models.

It is hoped that electronic noses will one day be able to be used to detect bacteria and distinguish MRSA in hospital ventilation systems. Scientists have also tried to use them to detect lung cancer from expelled breath and to identify brain tumours. They have also been used to try and detect kidney disease, bowel disease, and diabetes from urine. The results have all varied, however, a nonintrusive way to detect medical conditions at an early stage would be hugely beneficial.

The impact of a reduced sense of smell

Anosmia – the loss of smell – and hyposmia – a partial loss of sense of smell – have received little research. They are not considered critical, and therefore attracted less interest and funding.

Reduction in the sense of smell can be caused in various ways, including head trauma, viral infections, nasal obstruction, medications, and neurological disorders.

On top of the physical danger, issues can arise due to olfaction’s importance in taste. In some individuals, anosmia has been found to lead to anorexia, as there is no pleasure in eating.

On the other end of the scale, some people with hyposmia become obese as salty, deep-fried foods are the only ones that appear appealing to them.

Additionally, as taste stimulates salivary and pancreatic activity, a reduced sense of smell can then go on to interfere with digestion.

Sense of smell and dementia diagnosis

As we know, dementia is an ever-increasing problem, in part due to the ageing population. Unfortunately, it is difficult to treat and does not have a cure. As a result, the emphasis is on treating the symptoms, slowing the disease, and catching it early.

Early diagnosis is difficult due to there being no biomarkers, and early symptoms commonly mistaken for normal ageing.

It has been discovered, however, that an impaired sense of smell is one of the earliest clinical features of both Parkinson’s disease and Alzheimer’s. There is an overall reduction in the sense of smell, particularly affecting the individual’s ability to identify and recognise odours.

Various studies have investigated whether this may be useful in diagnosis. A meta-analysis of 81 studies concluded:

“[O]lfactory identification and recognition appear as the most interesting candidates to be included in a battery to detect subclinical cases in AD [Alzheimer’s disease].”

Another study discovered that a olfaction deficits are more significant in people with Lewy body disease (LBD) than those with Alzheimer’s. It is important to distinguish between the two, as some drugs used for dementias are not appropriate for people with LBD.

To conclude, although substantial leaps in olfaction research are few and far between, there is certainly a great deal of potential for the future of medical diagnostic technology. As Alexander Graham Bell noted, “If you are ambitious to find a new science, measure a smell.”