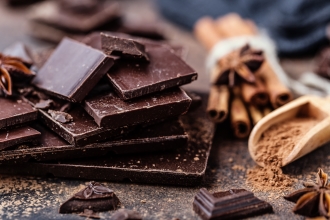 Eating a small amount of chocolate each week may lower the risk for a serious and fairly common irregular heart rhythm. This finding stems from a 2017 study conducted in Denmark.

It has become clear that the moderate intake of chocolate is part of a healthy diet – however, the study cannot determine if chocolate was entirely responsible for preventing atrial fibrillation.

The consumption of cocoa may boost heart health due to the number of flavanols it contains. These are compounds that scientists believe have anti-oxidant, blood vessel-relaxing and anti-inflammatory properties.

Prior studies have demonstrated that the consumption of chocolate is related to improved heart health and a reduced risk of heart failure and heart attacks. Dark chocolate it believed to have the most benefits as it is full of flavanols.

Very little research has been done to determine if chocolate is related to a decreased risk of atrial fibrillation. Almost three million people in the U.S. have atrial fibrillation, which increases the risk of blood clots and subsequent heart failure, strokes, and other complications.

The above-referenced study contains data collected from over 55,500 people in Denmark. The individuals were between the age of 50 and 64 when the study began, and provided information about their food consumption between 1993 and 1997.

The information was then tied to Denmark’s national health registries to determine which individuals were diagnosed with atrial fibrillation. Around 3,346 cases occurred across an average of 13.5 years.

Individuals who ate one ounce of chocolate each week were 17% less likely to endure atrial fibrillation by the study’s end compared to those who consumed chocolate less than once per month.

Eating chocolate is not enough to improve heart health. It must be combined with physical activity and diet health, and it is important to avoid smoking.

A double-blind, completely randomised and controlled trial is likely to be carried out in future to determine the true efficiency of chocolate consumption to prevent atrial fibrillation.

The research team could not account for unmeasured variables that may affect the risk of atrial fibrillation, and they did not have data on the type of chocolate the participants consumed. No information was collected about the amount of flavanols in the chocolate consumed, and it is likely that dietary intake was altered across the 14 years in which data collection occurred.