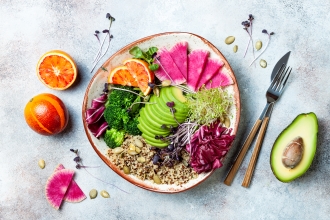 More and more studies are suggesting that eating fewer animal products is good for your health, and a large amount of evidence is showing that a plant based diet could benefit cardiovascular health.

A new study led by Casey M. Rebholz, Ph.D., strengthens these findings – it was discovered that eating more vegetables, legumes, nuts, and whole grains, alongside eating fewer animal products, correlates with a lower risk of dying of a heart attack or other serious cardiovascular event.

Rebholz and colleagues examined data from 12,168 middle aged people who had enrolled in the Atherosclerosis Risk in Communities (ARIC) study, which followed participants between 1987 and 2016.

25% lower risk of death from any cause

The findings from this study revealed that the participants with the highest intake of plant based foods and scored the highest on the indexes were 16% less likely to have a cardiovascular condition such as a heart attack, stroke, or heart failure.

High plant based food consumers were also revealed to be 25% less likely to die from any cause, and had a 32% lower risk of dying from a cardiovascular condition.

“While you don’t have to give up foods derived from animals completely, our study does suggest that eating a larger proportion of plant based foods and a smaller proportion of animal based foods may help reduce your risk of having a heart attack, stroke or other type of cardiovascular disease,” says the lead researcher. “There might be some variability in terms of individual foods, but to reduce cardiovascular disease risk, people should eat more vegetables, nuts, whole grains, fruits, legumes, and fewer animal based foods.”

Rebholz also pointed out that this study is one of the first to examine this association in the general population. Comparatively, most previous research has discovered cardiovascular benefits for plant based diets in smaller populations, such as vegetarians.

Rebholz added, “The findings are pretty consistent with previous findings about other dietary patterns, including the Dietary Approaches to Stop Hypertension, or DASH diet, which emphasize the same food items,” Rebholz adds.

However, the study has some limitations, including the self-reported nature of the dietary intake. The ARIC study also measured the dietary intake of plant based and animal based foods decades ago, and so may not reflect the modern food industry. Finally, the study cannot prove causation.